Making Sense of the Insensibility of the Las Vegas Mass Shooting

You are here: Home / Security News / Making Sense of the Insensibility of the Las Vegas Mass Shooting 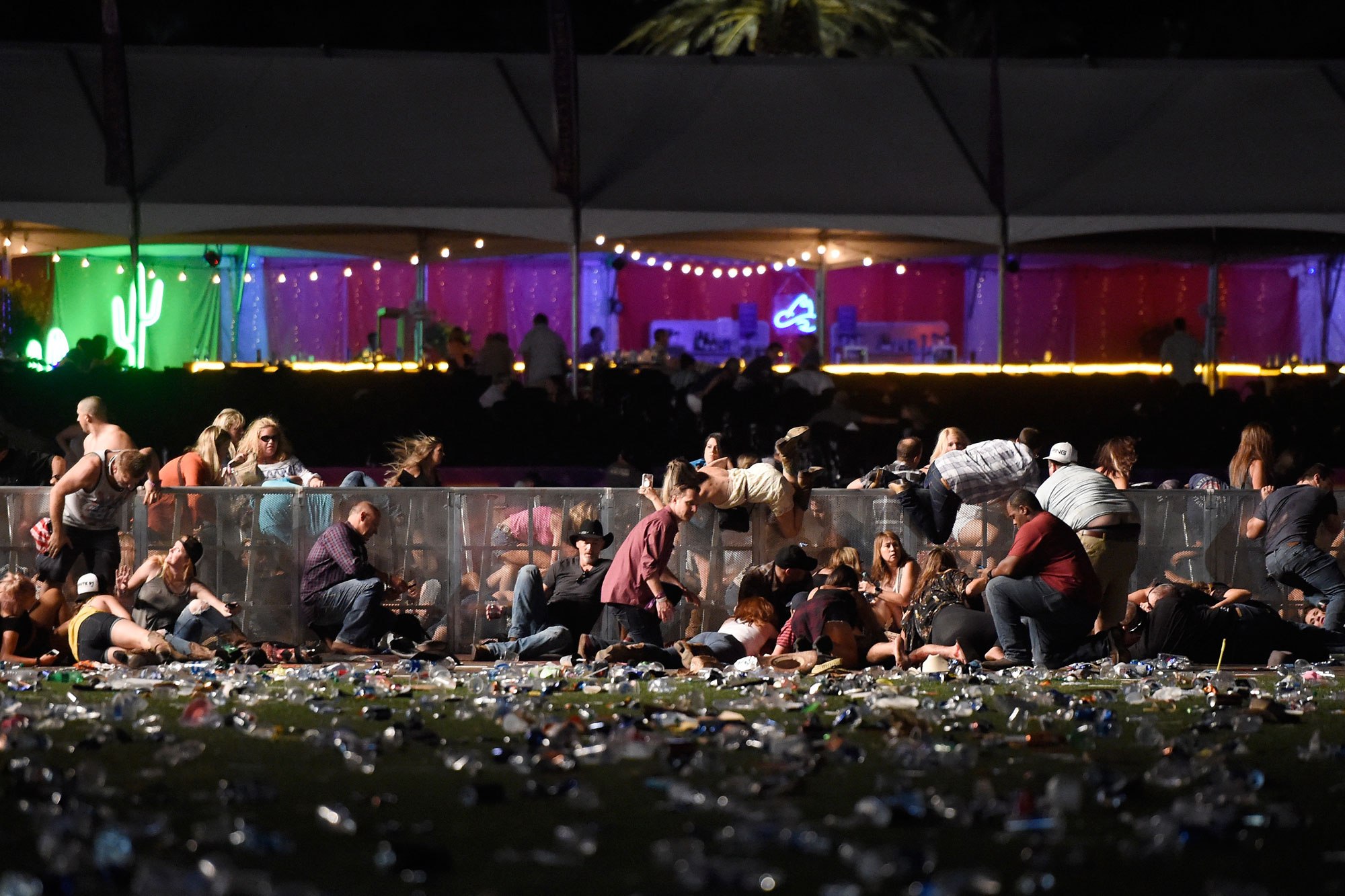 The USA has once again become victim to another mass shooting.  Sadly, the attack in Las Vegas on Sunday the 2nd of October of this year, sees the deadliest mass shooting in their history, with fifty-nine people confirmed dead.  The shooter had targeted and attacked the victims at a concert all the way from the 32nd floor of the Mandalay Bay Resort & Casino where he was staying.  The police also found over twenty additional rifles in the room with the shooter after raiding the hotel.  Some of the rifles were even modified to be able to shoot more quickly[1].

Naturally, the first question asked after such a tragedy is; how did the shooter manage to have so many deadly weapons available to him so easily? Unsurprisingly, the answer becomes a heated debate about gun control in the USA.  Non-Americans meanwhile, no longer need to have these kinds of debates following strict crackdowns on gun laws over the past few decades.

Australia’s gun control policies in particular have seen a dramatic and effective reduction of gun violence and have reduced mass shootings considerably.  Similarly this has been the case in other countries with strict, yet sensible gun control laws such as the UK and Canada.[2]

Australia’s legislation permits the government to register existing firearms, thus making them easy to trace.  Any shootings that may occur here in Australia can be easily investigated by law enforcement.  The USA has not yet legislated the creation of a national gun register– thus making it difficult to trace gun ownership and firearm use across states[3].  Likewise, there is minimal restriction on screening potential gun buyers in America – permitting anyone to purchase a firearm with little to no restriction, depending on the state.  As a result, pro-gun lobbyists argue that mass shootings are a mental health issue, as opposed to a gun access issue. Nevertheless, such concerns have not prevented some mass shooters with mental illnesses from easily purchasing firearms.[4]

In comparison, Australia neither has a constitution that politicises gun ownership as a citizen’s right nor has it ever developed a strong gun culture over its history.  Aside from the financial and political strength of America’s gun lobby – the information disseminated and absorbed by America’s public has informed their attitudes regarding gun ownership, and their personal and national security.  Inevitably, this will remain a polarising and politically charged subject in the USA for years to come.

Outside of this gun debate – it is important to reflect on other issues that arose from the October 2nd mass-shooting event, as these can provide other sensible solutions to future security issues during critical events.

The question remains, had this attack occurred in another country, like Canada, the UK or Australia, where gun control appears to work successfully, what would the security response have looked like? And what would a security de-brief seek to analyse? Some viable responses to this event have been suggested, as outlined below:

Some American analysts (skirting around the gun-control issue) looked at putting scanning devices in hotels to combat the threat of gun violence and mass shootings.  Scanning devices in public areas are not entirely uncommon at many sporting events and some music festivals already employ scanning and security checks at entry points.  Scanning luggage at hotels would seem an inconvenience, but it may not be any more inconvenient than those held at airports, for example.

Crowd control is a huge challenge to deal with, especially in the event of an active shooter or terrorist attack.  It is human nature for people to panic and run to the closest place of safety or exit.  Indeed, one Las Vegas mass shooting witness stated that she was crushed by the stampede of individuals rushing away from the scene.  Not only was she distressed from fear of the shooting, but also complained that no one had tried to help her and got trampled by the crowd[5].  This testimony is not dissimilar to experiences in other events, such as the Parsons Green train bomb attack in London a few weeks ago.  As people rushed to the exits of the train station, panicked commuters were crushed in the throng of people, with one woman witnessing a pregnant woman getting stampeded over.  Despite calls to spread out on the platforms, people continued to panic and some got injured in the crowd[6].

Security officers attempting to evacuate people from a high-risk area will need to consider directing them to cover if a full evacuation is not possible.  In the particular case of an active shooter situation, the public should be directed to stay low in places of cover, such as under large objects (e.g. cars) and the sides of buildings (or anything that can at the very least provide good cover from one side).  Essentially, the public needs to be removed as far from the epicentre of the shooting as possible.  This allows security forces to enter the area without risking harm to the public.  Furthermore, this kind of crowd management also allows for medical aid to extract any victims from the periphery of a high-risk area easily and quickly.

It is impossible to control human behaviour in situations such as mass shootings, therefore it is imperative for security forces to assert calm and clarity when evacuating or moving people in high-risk areas.

One of the most difficult things to control in a situation such as that of an active shooter is the dissemination of accurate information.  Witnesses have said that at the time of the shooting in Las Vegas, many assumed the sounds of gunshots were the sounds of firecrackers.  Some spectators even remained in their seats even after the singer on stage had already run off to seek shelter.  In the aftermath of the event, the terrorist group ISIS capitalised on the shooting, claiming the shooter as one of their own.  This was later refuted by police, citing that the shooter had no connection to ISIS or any other radical political ideologies.

Nonetheless, the confusion during a mass-shooting event can lead to continued tension and insecurity even after a critical event.  It is important to have clear and open lines of communication with the press where possible, even during times of urgency.  It can also be useful to collaborate with the media to ensure a wider dissemination of instructions to control and reassure panicked crowds.

A mass shooting event never makes any sense.  Not from a cultural, political, social or security point of view.  The USA coined the term ‘active shooter’ to identify similar events because it is such a common occurrence.  The sheer amount of these kinds of events in the USA continues to baffle non-Americans, especially in countries where gun-control legislation has been successful in reducing gun violence and mass shootings.  Sadly, the debate on gun control will continue in the USA for a long time to come, as the issue remains such a politically and socially charged subject.  Without any sensible debate being applied to the subject, mass shootings will continue to be a problem in the country.

How can common sense be applied to such situations? More scanning and screening might provide an answer, but can also be an inconvenience and costly.  Controlling crowds in an urgent situation also has its risks, as it is difficult to evacuate the public in a calm and controlled manner.  All of this ends up boiling down to how effectively security and law enforcement agencies can disseminate information in a timely and clear manner aiding in reducing panic controlling the movement of crowds.  Ultimately, common sense must always be the thread that binds good security policy together.  However, finding that common sense can be elusive in the midst of such tragic circumstances.  Planning and conducting threat and risk assessments for high-risk events that have the potential to be targeted can be useful, as can developing communication and evacuation plans as part of these assessments, although as previously stated it will always be an extremely difficult situation for all those involved, some effective pre-planning has the potential to save lives.

If you need assistance with event threat and risk assessment to help assess the controls that may help to mitigate and lessen the impact of an active shooter situation please do not hesitate to contact Agilient.