After over 100,000 fans crowded into the Melbourne Cricket Ground (MCG) this time last year, Australia’s largest stadium prepared for another AFL Grand Final day on the weekend that attracted ever growing numbers. The event kept authorities busy as they attempted to protect the crowds from the variety of security threats that may have arisen. Indeed, protective security has always been a top priority for the MCG, according to Chairman Steve Bracks. 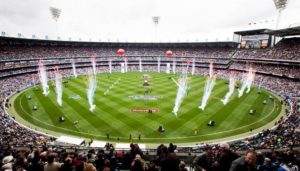 Over the years, MCG Managers have continued to review, refresh and evolve their Security Master Plan, responding mainly to global security trends, expert advice and recent terror events. In 2015 for example, a 1.8 metre cyclone-wire fence, coined the ‘ring of steel’, was erected around the MCG for the summer cricket matches, in response to the then-recent terror attack in Paris. Then, after a series of vehicle attacks plagued Melbourne in 2017, killing seven people in total, anti-terror bollards were placed along the grand final parade route ahead of the event, and a heightened security presence was initiated. Victoria Police Assistant Commissioner Stephen Leane explained that the bollards resulted from months-long collaboration between the Police and the City of Melbourne.

This year, the MCG banned cars from parking at the venue, a strategy designed to reduce the likelihood of a vehicle attack targeting the immense crowds. The MCG’s CEO, Stuart Fox explained that “ongoing events both around the world and closer to home clearly demonstrate that we need to minimise the risk of interactions between vehicles and pedestrians, especially in crowded places such as outside the MCG”. The strategy was successfully tested during the Fourth Ashes Test in December and is designed consistently with the government’s strategy to protect crowded places.

Australia’s 2017 strategy for protecting crowded places is focused on improving the security of these places by fostering a network of information sharing and partnerships between private and public sector stakeholders in a bid to develop a more sophisticated ecosystem of security. The policy designed a ‘Crowded Places Partnership’ that owners and operators may join, placing them in a network with a broad spectrum of experts and authorities, including counter-terrorism officials and police. The ongoing exchange of information is designed to increase the speed and flexibility of responses to threats.

The policy also advocates for ‘layered security’, which involves implementing complementary security measures that will reinforce one another and reduce the likelihood or damage of a single measure failing. Owners and operators also have access to protective security tools including a Security Audit, a Self-Assessment Tool, Hostile Vehicle Mitigation Guidelines, Chemical Weapon Guidelines and more. While a ‘crowded place’ can encompass a large range of different locations, venues and businesses, the most common are shopping centres, transport hubs, entertainment and sporting venues.

While the MCG continues to work with Australia’s national security experts to ensure their events are safe, protective security will remain an ever-present concern for these types of venues. Indeed, Melbourne has been the target of nearly half of executed and thwarted terror attacks in Australia since 2005, and incidents of crowd violence continue to plague events to this day.

Since 2016, retired MCG CEO Stephen Gough has been warning that the venue desperately needs a serious security upgrade. Reports held that a $1 billion upgrade was being proposed for the MCG amid concerns for the huge queues of fans outside the stadium. Gough admitted that the stadium faced “unique challenges”, and they were therefore exploring “various structures and whether they [will] be temporary or permanent and the cost”.

Technological advancements are also slowly being embraced as part of these venues’ security plans. In January this year, the Sydney Cricket Ground (SCG) installed over 800 hi-tech facial recognition cameras that could help combat anti-social behaviour, terror threats and the entry of banned members. With the capability to locate people from over 1.5 kilometres away, the $3.5 million system is part of a security upgrade utilising an algorithm to recognise facial characteristics and behaviour. In a similar move, Victoria Police are beginning to implement a three-year counter terrorism strategy that may involve flying drones over crowds at major events, such as the AFL Grand Final, to monitor behaviour and track movements.

There are numerous threats to a venue or business that can be mitigated or prevented using the proper steps. Effective security strategies that consider the unique physical security risks faced by your business are an essential aspect of operations. There are a wide variety of protective security areas that can emerge, ranging from terrorism threats to alarm systems, customer violence to locks and fencing. If you need expert advice on identifying, preparing and implementing a protective security policy framework, contact Agilient today.